We have a very busy summer and it started with a trip to New York City. On June 25th we piled in the van and my parents got in their car and we were off to head North. We made great time up until we got to the Lincoln Tunnel. We left home and 10 1/2 hours later we were at the Lincoln Tunnel; Approx. 700 miles in 10 1/2 hours which is too bad considering there were 2 cars, 4 adults, and 3 kids with the youngest celebrating her 2nd birthday. What away to have my daughter celebrate her 2nd birthday; a long, long car ride. Everyone did great. Unfortunately, the timing wasn't so good; as we arrived at the Lincoln Tunnel at 4:30 pm on a Friday afternoon. It was then 3 1/2 hours later that we arrived at our hotel- and it was only 15 miles away.

We were all glad to be out of the car by that time and begin a fun filled 4 days in the Big Apple. So what is one thing to do in New York.... eat dinner late at a Diner. So that is what we did. We enjoyed a great dinner where everyone was stuffed full. We sang happy birthday to Sara as she blew out her candles on a bowl of ice cream; she was thrilled because she can really care less about cake but loves ice cream. (however, I forgot the camera.) And then we headed back to the hotel to get a much needed nights rest as Saturday was set to be busy.

Saturday morning we got up, had breakfast at the hotel and got in the van. My parents had a wedding to attend so the 5 of us were off for a day to sight see. After David's great driving through Manhattan on a Friday night he decided that it can be any worse on a Saturday so instead of taking the subway as we had planned we drove into Battery Park. We had tickets for the Statue of Liberty at 9 am so that was our first stop. David and the kids had never been and I hadn't been in 20 something years. Going over to lady Liberty was an adventure to say the least. I am very grateful for security; however, Sara was not at all excited about the fact that they insisted on her going through the security screeners solo. It became rather amusing as the security guards thought she would walk through to them and wait for us; no so much. So David went through and I attempted to send Sara through to him. After much coaxing she finally made it through; but not once about three times because then she thought it was fun to run back and forth to David and I. I thought things would get better and it did relatively. Lady Liberty was beautiful as ever, the NY skyline from her was magnificent (other than the last time I stood on Liberty Island the Trade Center Towers stood so predominately), and David enjoyed the history. However, note to anyone going with a toddler. They don't allow you to take a stroller into the platform or the museum.

Following our trip to the Statue of Liberty we walked and walked and walked..... through the financial district, to Ground Zero, and throughout Lower Manhattan. We also explored China Town and Little Italy all in record breaking temperatures of 98 degrees.
On Sunday, we decided to take it a little more low keyed and headed out to Long Island with my parents. Our first stop was to Long Island National Cemetery to pay respects to my paternal grandparents. It is a surreal sight to be in a National Cemetery and an honor to be the granddaughter of a WWII vet. Later that morning we had a nice brunch at my parents' friends house. The kids enjoyed playing on their grandchildren's trampoline and with the toys, and eating yummy food. Mid day we were off to visit my cousin Billy, and his family; Josephine, Marissa, Liam, and Baby Aiden. It was wonderful to see them. We kids all played well together, ran throughout the back yard, swam in the pool, shot water guns, and laughed and laughed. We had a wonderful dinner of grilled ribs, burgers, roasted corn, and potatoes. It was wonderful to spend time with family that I hadn't seen since before David and I were married. The funny part of the day was that it was my parents who spent most of the time in the pool with their grandchildren and great niece and nephew while Billy, Josephine, David and I sat around talking. Billy did get in for a little while but that was between chatting and grilling! 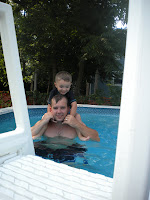 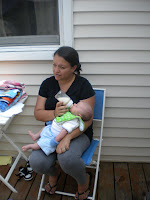 On Monday, our tour guide and NY city native; aka my dad; took us on a tour of the well known spots of the city. We rode the subway from Queens into Manhattan; all the kids were very excited to be riding. Sara was so so excited to ride the 'train'. First stop of the day was to Central Park. It was already getting very hot in the city so it was a short stroll through a very large park.

Jared and Xander in Central Park

We ended our walk through the park at Columbus Circle; and what else do you do if in Columbus Circle with three kids.... FAO Schwarz. All three were in heaven. Jared and Xander quickly headed to the Lego section and Sara to the piano featured in the movie Big. It's a good thing there were 4 adults it was definitely divide and conquer; or we still might be there today!

After FAO Schwarz; Sara decided she had had enough riding in the stroller. Nothing was convincing her to ride so off she went holding grandpa's hand walking down 5th Avenue. She walked for 15 -20 blocks; keeping up a great pace for a 2 year old. She also convinced grandpa that it was time for ice cream as we passed Trump Towers; so to get a break from the 90 something to degree temps at 1100 am; we cooled off inside Trump Towers and had ice cream for a mid morning snack.

We continued walking up 5th Avenue and stopped into St. Patrick's Cathedral, Rockefeller Center, the boys went to the Nintendo Store (and spent money), we passed NBC, and continued walking to Time Square. As we left Rockefeller Center, Sara decided she could ride again and by the time we got to Time Square she was fast asleep. Unfortunately for her she missed the M & M store but it was probably a good thing for us because she Loves M&M and I'm not sure she would have been convinced she didn't need any with the wall of M&M on the mix your own.

We also rode the Ferris Wheel in Toys R Us after she awoke. To conclude the day we headed back to Little Italy for some Gelato and pastries. They were almost too beautiful to eat.

Our final destination while being in the city was to drive out to Rockaway Beach before meeting my Aunt Pat for lunch. Rockaway is where my dad, his parents and brothers and sisters use to come on the weekends. Dad said it's changed alot in sixty years. Just behind the boardwalk where we were used to be an amusement park and cottages; now its high rise apartments. It was still beautiful to know that you can be standing on the boardwalk watching and hearing the waves of the Atlantic, watching planes descending into JFK and still see the Manhattan skyline all at the same time

Well our vacation continues for another 5 days throughout more of the State of New York...........