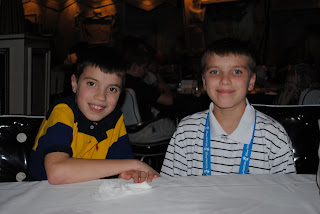 Jared and Xander at dinner 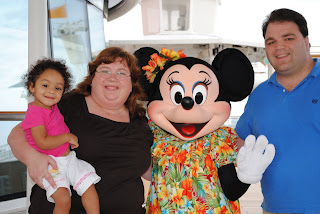 Sara, me, Minnie, and David (the only way to get Sara
in a picture and to smile; keep her farthest from the characters!) 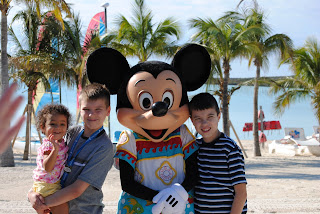 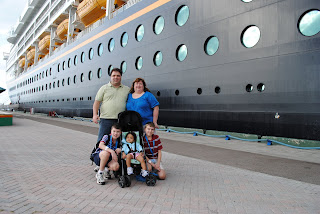 5 of us in Nassau, in front of our ship, Disney Wonder 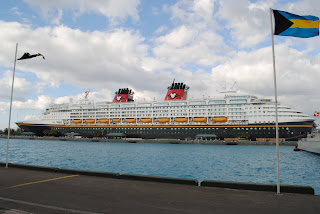 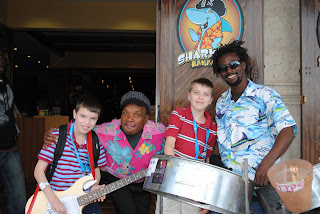 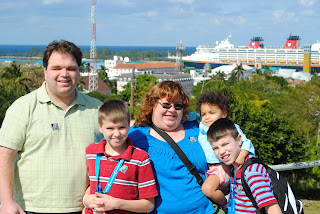 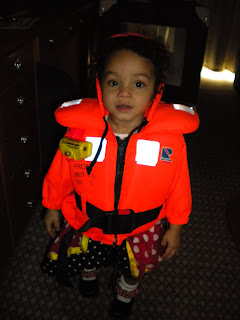 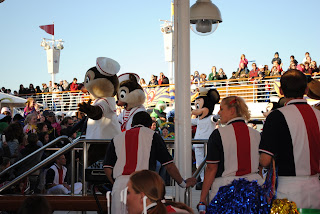 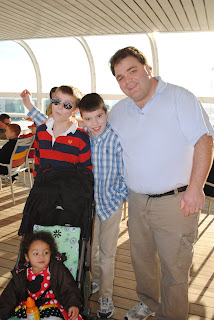 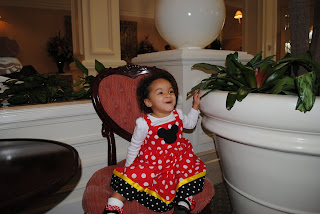 Sara in her Minnie Mouse dress (Thanks Tami, I loved her in it!)

We had a fun four days cruising the Caribbean to Nassau and Castaway Cay (Disney's private island). Despite the unusually cool temperatures and a few other inconveniences we had a good time.
Day 1: We started the morning by checking out of the resort and going to 1900 Park Faire at the Grand Floridian resort for a breakfast with the characters. After which we drove an hour and fifteen minutes to Port Canaveral.


We boarded the ship with great ease because we had already checked in at the Disney Resort the day before. We had an amazing buffet lunch with anything that you can dream of to it. We then checked the boys into the youth camp and checked out our cabin. It was then time for the safety drill where everyone has to get in their life jackets. Sara didn't mind until she realized that it wasn't a 5 minute thing and she wanted out of her jacket. After the drill we headed up on deck to particpate in the sail away party. Sara enjoyed looking out at the "wa" aka water and "boat"(s); and the boys quickly found the free soda machine (since they knew there were exceptions on vacations to being able to drink soda unlike the typical milk, water, juice, or lemonade). We then headed to the room to get ready for dinner. Following dinner the boys took off to the youth activities, Sara, David and I headed to the show, and afterwards Sara and I headed to bed, and David went out for a while. Next I knew it was midnight and the boys and David finally were coming to bed.


Day 2 of the cruise: Of course, it was in the upper 60's in Nassua, so compared to home we were warm :) While in Nassau we took a boat ride along the harbor and then they dropped us off to a 'submarine' and were able to go under water to see the coral and fish. After riding on the boats we went back to land for a bus tour throughout Nassau. We saw the town and even went to an old fort. For lunch we ate at the Hard Rock Cafe' which was good (or so we thought; as the next day Xander and I spent most of the day sick with food poisioning, we believe our food poisioning came from the HRC because it was the only thing that Xander and I ate the same of.) In the evening, David and I had reservations for dinner at the 'adult' restuarant. So we skipped our main dinner, headed to the show on the ship "Toy Story the musical" and then fed the kids dinner. Once Sara was asleep, David and I went for our date to Palo. Since we had walkee talkees, were only two floors away, and Sara was soundly sleeping the boys babysat. They did a great job, and David and I enjoyed a nice quiet dinner.


Day 3: On Tuesday the ship stopped at Castaway Cay, a beautiful private island owned by Disney Cruise lines. The day was beautiful but despite low 70 temperatures and water temperatures that were only in the 70s too; unfortunatley it was too cold to swim. All of us went in to our ankles; David snorkeled for 10 whole minutes! Then... came the effects of the food poisioning; about 24 hours after eating at HRC in Nassau. So, Xander and I spent the rest of the day in the cabin. Jared was a little under the weather too so he took a nap and caught up with David and Sara later. David and Sara had a great time of playing on the ship, in between stopping in the room to check on us and do laundry. I won't go into any further details. They also had a date for dinner; as they were the only ones that wanted to eat. After Sara went to bed; David and Jared went to the Pirates of the Caribbean Show and fireworks. They said it was awesome, Xander and I hated to miss it.


Day 4: Day at Sea: This was the most relaxing of all the days. We got up when we wanted, as we had no tours scheduled and everyone was feeling better. We all ate breakfast and the boys took off again for Oceaners Lab (youth program), we took Sara to Flounder's Reef (the program for under 3 ), and David and I went for coffee. Following lunch, it was nap time for Sara (the 1st real nap she had in 5 days), so I took advantage and napped too; as the boys were back at the Oceaners Lab. Later that day we packed as they collected our luggage that night; went to dinner, and then saw a great show that was clips of all the disney musicals narrated by Peter Pan. A great end to a good trip with challenges to make us stronger as a family.


I am going to do a future posting on the pros and cons of Disney Cruising vs. Cruising in general as I have had several people ask...would we do it again, is it worth the money. Look for it to come.
Posted by Life of 5 Letteers at 10:08 AM